skip to main | skip to sidebar

When the going gets weird, the weird turn pro. - Hunter S. Thompson

From an article in this week's Economist, I learned of the existence of the Plain English Campaign.

Plain English Campaign is an independent pressure group fighting for public information to be written in plain English. We have more than 7500 registered supporters in 80 countries.

'Public information' means anything people have to read to get by in their daily lives.

'Plain English' is language that the intended audience can understand and act upon from a single reading.

Please visit and consider signing up as a supporter. They're doing fine work, and as they are entirely self-financing they don't want your money, just your moral support.

Oh, how I love Chowhound. (I've picked up some of the best restaurant tips ever from their discussion boards, and have no doubt avoided some very expensive bad meals as well.)

The user community there really cares about good food. It is my spiritual home.

In honor of Halloween, here's a short Chowhound thread entitled, "How can I make my gingerbread men look evil?" Please note the utter concern and seriousness with which this question is asked and answered.
Posted by Barry at 10/30/2004 No comments:

According to the New York Times, on Fridays, we in the blogosphere, when not caught up in partisan political bickering or trying to take down gasbag anchormen, apparently engage in a little catblogging. 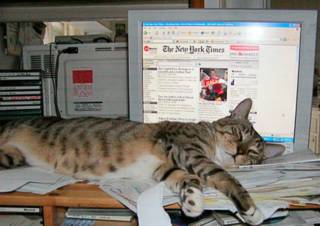 Gato joined our household in the early spring of this year, following our horrified discovery of a massive, building-wide mouse infestation. Some construction up the block apparently left a huge clutch of mice homeless, and they moved en masse into our quaint, un-mouseproofed turn of the (20th) century apartment building.

We tried everything to get rid of the mice. We trapped them, with breakneck traps and glueboards and high-tech mousetraps of every description. (One so-called "humane, better mousetrap" wound up decapitating and crushing the mice it caught... hmm, perhaps it was adjusted incorrectly? And we abandoned the glueboard after discovering that mice can scream. Shudder.)

We blocked every opening we could find with copper wool, foam, and caulk, took up the dog food at night and stored it in metal containers, locked up the kitchen garbage can like it held plutonium...

We had the exterminator come out to our house to put down traps and poison three times (direct quote from the feckless exterminator: "It's been a bad year for mice.")

Finally, we recalled that the time-honored way to control a mouse problem is... get a cat!

We got Mister Gato from Robert Shapiro at Social Tees, a custom screenprinting business in the East Village that is really just a front for an incredibly effective animal rescue operation. Robert finds new homes for hundreds of animals every year.

After convincing Robert that we were loving and responsible pet owners, and that our fierce, scary Chow Chows were unlikely to commit cat-icide, we brought this beautiful, young, athletic cat home with us.

We had hopes that he would be a good mouser. Gato had been living on the street, so hunting should have been familiar territory to him.

We were unprepared, however, for the glee and ferocity with which he did his job. Dude, this cat was the Mouseinator. A rodent-killing machine. Not only did he catch them, he ate them, too, nose to tail.

I'd tell you just how many mice he killed over the first few months, but you wouldn't believe me. Really, you wouldn't. Nope. And then once that horrible number sank in, you'd run away from me going "Ew ew ew ew ew" at the thought of us living in this tiny apartment with all those mice.

Suffice it to say, we ran out of mouse skull stickers for the side of Gato's litterbox... we wanted to record the confirmed kills on his "fuselage" as if he were a flying ace.

Gato has secured a permanent position on our domestic payroll as Rodent Control Engineer. Plus, he's very affectionate, furry and soft, he purrs a lot, and the dogs love him almost as much as we do.

With a week to go before the election, our phone has been ringing off the hook with soft-money-seeking groups of all descriptions prospecting for a bit of the ready. For some reason--an erratic/perverse kind of ESP?--I've been picking up on all the left-wing callers.

My wife and I have a mixed marriage. She's a more or less traditional-liberal sort, a registered Democrat, while I'm a conservative (and registered Republican) with a strong libertarian streak.

This occasionally makes for interesting and intense political pillow-talk, but we're grownups about it, and we generally get along like a house afire.

Early on in our relationship we agreed to a mutual non-aggression pact on political and charitable donations: funds held jointly will not be used to back any candidate or organization that we don't both agree on.

As a practical matter, that means that our donations tend to go to civil rights groups, arts and environmental charities, groups that try to help the homeless and hungry in NYC, and so forth.

Neither Bush nor Kerry (nor, for that mattter, our financially well-endowed alma maters) got a dime out of us this year.

By now, we're old hands at blowing off callers pleading for money for one cause or another. "Our charitable giving is fully committed for the year; please take us off your list."

Tonight, though, I picked up the phone on the third ring and found myself in conversation with a smooth-talking representative of the NAACP Legal Defense Fund, a group I've supported in the past and in whose program I generally believe. They were raising money for a special poll-watching and vote-counting effort, and after quickly checking with Carrie I caved and forked over a modest donation.

I harbor no illusions about the political bent of most of the Legal Defense Fund folks. A friend of ours is on their board of directors, and while he's a wonderful guy you just about couldn't find someone I differ with more on most political issues.

But I back them because, on the cases and issues they choose, they're usually on the side of the angels: trying to ensure social, economic and political particiption rights for all.

McCain on the pleasures of the Vice Presidency

Arizona Senator John McCain turned down John Kerry's offer to be his Vice-Presidential candidate, and was even rumored at one point to be a possible replacement for Cheney on the GOP side...

At a recent fund-raiser in NYC, he explained why he wasn't interested:

"As a POW in Vietnam, I was kept in the dark and fed scraps. Why would I want to do that again?"

"One second while we reboot your cable box..."

We've been having intermittent problems with our cable service, and Time Warner finally convinced us to convert to digital cable... for about five bucks more a month than we'd been paying, we'd get about a hundred more channels (!) and an off-brand digital video recorder (as the TWOPpers would put it, a "TiFaux") thrown into the bargain.

Aside from the news and college basketball, we don't watch a huge amount of television... though HBO's Sunday-night series (The Sopranos, Deadwood, The Wire, and now Family Bonds) have got us pretty much hooked.

But there are some other shows we might like to watch, if they were on at more convenient times. I had visions of TiFaux-ing the BBC World News, Jon Stewart, and a handful of other shows that I'm either never at home or never awake for, so I was eager to get on with the installation. Bring on the hot-and-cold running Simpsons!

After waiting all day Saturday for the cable guy to show up during our "appointment window," he finally materialized, took our old cable box away and left a Scientific Atlanta Explorer 8000 Home Entertainment Server in its place. He presented me with a remote control that ought to require a pilot's license, gave me a brisk three-minute orientation to the system, and split.

It was then that the troubles began.

The admittedly crisp digital picture on the screen kept jittering and freezing. The box wouldn't accept commands from the remote control. And the Interactive Program Guide (the basis for all of the digital video recorder functionality) suddenly went blank... it read "no program data" for every slot in the guide.

After twenty minutes on hold with Time Warner customer service, I got a bright, friendly young woman on the phone who walked me through a troubleshooting session. We rebooted the cable box/DVR (it's got a hard disk in it, a couple of tuners so you can record two shows at once--it's fairly complex) three times... one "soft" reboot, two "hard" (power-cycle) reboots. She "sent signals down the line" to try to electronically bitch-slap the Home Entertainment Server back into its right mind.

Finally, she booked an appointment for a technician to visit us. Next weekend.

This morning, the box is behaving just fine.

Friday nights are usually quiet affairs at our place, often involving a takeout dinner, some jazz on the old streaming audio, and a nap on the couch. As a rule, Carrie and I are pretty fried at the end of a work-week. (As someone once observed, it's amazing how much "mature wisdom" resembles "being too tired.")

Last night, we shook off our usual end-of-the-week exhaustion and, after an indifferently-prepared-and-served meal at an Upper West Side joint (future blog topic: why are there no really good restaurants in this neighborhood?) we went to a concert at the Beacon Theater.

The Beacon is one of my favorite places to hear live music. It's a lovingly-restored vaudeville theater dating from the 20's; the acoustics are terrific, the seats are big and comfortable, etc. They literally don't build them like this any more.

I could probably just stop this post right here and leave the details to your imagination...

I've always been a sucker for the singer-songwriter thing, and every one of these guys was "alt.country" (a genre I particularly enjoy) long before that term was even coined--in fact, you might say that writers and performers like Guy Clark and Joe Ely (especially with his first band, The Flatlanders, recently reunited and touring again) shaped the alt.country template.

They are all very different performers, but what they've got in common is a storytelling tradition, tuneful music and a winning way with a smart lyric.

Here, for instance, is the irresistable Guy Clark, placing Doc Watson in the proper artistic and historical perspective in "Dublin Blues":

The performers took turns playing songs, one at a time. As Lyle observed, "This is a pretty good deal... three-quarters of the time, I'm part of the audience."

What a spectacular night. Fatigue and post-meal heartburn instantly forgotten; we were walking on air on our way home.

And this morning, I surveyed my music collection and concluded that I need some more Guy Clark albums. Ordered.

This work is licensed under a Creative Commons Attribution-Noncommercial-Share Alike 3.0 Unported License.